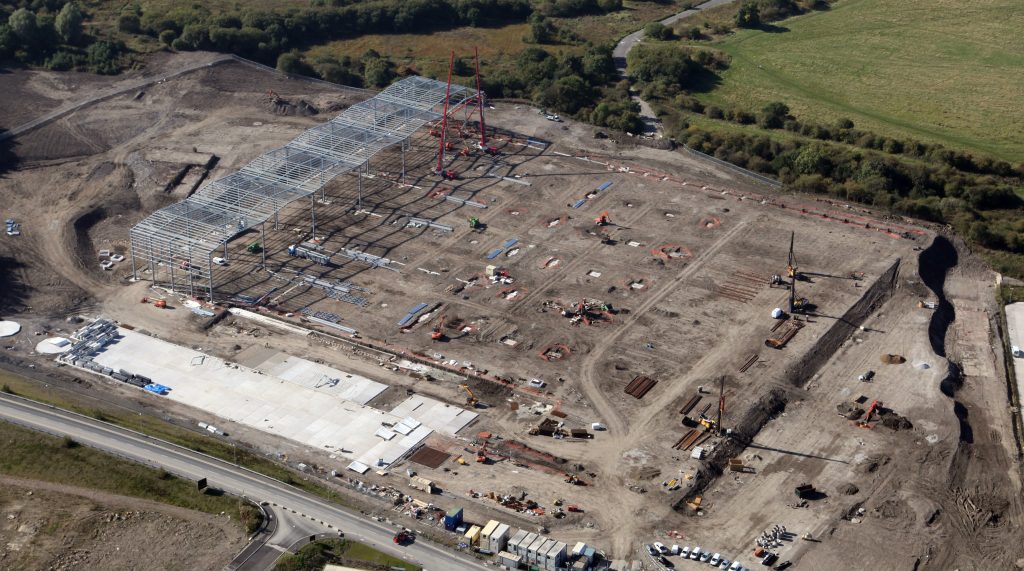 Construction of the new 543,620 sq ft Exertis distribution centre at Burnley Bridge Business Park is well underway, with 20 per cent of the steel framework now erected.

Technology distribution business, Exertis, became the largest occupier to-date at the 70-acre park following the deal with developers, Eshton, back in March, which is believed to be the biggest distribution deal in the North West so far this year.

Main contractor Bowmer & Kirkland began in July and so far nearly half of the service yard concrete has been poured, with all of the piling in place to support the weight of the building.

Drainage, fencing and foundations work is also ongoing, and more recently, steelwork erection commenced with the first 200 tonnes of steelwork delivered to site.

James Chapman, managing director of Eshton, commented: “The deal to bring Exertis to Burnley Bridge Business Park was a landmark for the region and us as a business, so to see the building finally taking shape is a huge step forward for commercial development locally.

“Every day we see more and more progress being made at the site but it’s great to see the steelwork going up as this is a major milestone in the project’s delivery.”

Gary Bradley, regional director of Bowmer & Kirkland, added: “We are delighted to be working with Eshton to deliver this distribution centre for Exertis. We are on programme and construction has progressed very well.”

Steelwork erection will continue over the coming weeks, with precast concrete works and cladding set to commence later this month.

More than 42 kilometres of steel tubular piles, 40,000 tonnes of concrete and 2,000 tonnes of steel are expected to be used on the site in total, and once complete, the building will be large enough to house five full-size football pitches.

Bowmer & Kirkland expects to complete construction in May 2016 with the site fully operational by early 2017.

• 3300 of 3911 piles are now in place to support the weight of the building
• 65 of 160 concrete pours completed – currently pouring two bays per day
• Steelwork erection commenced with delivery of first 200 tonnes of steelwork
• A total of 42 kilometres of steel tubular piles will be driven into the ground
• Approximately 40,000 tonnes of concrete to be used on the scheme in total
• 5 full size football pitches could be fitted inside the building on completion